If you’ve read the first chapter of the project I’m writing for this blog, The School of Arts, you’ll know two things.  One, I’ve only introduced two characters, but they both have their fair share of eccentricities.  And two, one of them might actually be a tad bit unbelievable in the beginning.  I mean, blue hair, a leather jump suit and deadly chic bow; in what reality would that be classified as realistic?  Nevertheless, it was all done for a purpose.

Let me start by discussing, or rather, dissecting, my main character.  Whenever I start a story, I open a separate document and call it something along the lines of “Ideas.”  I use this to jot down all the random thoughts pertaining to the story that pop into my head.  Whether they are plot twists, future scenes, or character sketches, I know that if I don’t write them down they could disappear forever.  I’m not being dramatic here, either; I have a knack for forgetting important things.  Even if you have a photographic memory, though, it’s honestly a good habit to get into.  It keeps me on top of things and gets me in the mood to write the actual story.

This is part of what I wrote about Lucas before I even started writing the first chapter:

Lucas is what I’d call average, in every sense of the word.  He’s never done anything remarkable with his life, but he’s perfectly content with letting the days pass him by in a muddled blur of mediocrity.  He’s not really a loner, but the friends he does have aren’t that close to him.  As far as his personality is concerned, he’s not particularly introverted and can be quite charismatic if the need arises.

I wanted to get a feel for Lucas before I started writing about him, so his actions and dialogue would portray his character.  The last thing I want is for my characters’ actions to appear forced or unrealistic.  Everything they do has to reflect who they are, otherwise my readers will start to feel detached.    Here are some examples straight out of chapter one that either hint at or explicitly characterize Lucas:

“…and it certainly isn’t the first time he’s taken advantage of her nearsightedness and snuck in a quick power nap during her class…” -> This suggests he’s dozed off during class more than once before.  Any reader will draw the same conclusions upon reading this and I’m almost positive it’s what I want them to think about him.

“This time he listens.  Although, it’s not because of the terrible danger he can sense he’s in or the threatening tone the girl has taken on.  The one thing Lucas hates, even more so than his prude of a stepfather, is when someone suggests he’s anything less than a man.  He gets plenty of that at home without having to deal with prissy know-it-alls like her.” -> In this short paragraph, I not only try to explicitly portray his personality through the explanation, my intention is to make it apparent in the wording as well.  This is essentially a thought that races through his head, so the word choice of “prude” and “prissy” show that he is indeed a slightly defensive and stereotypically overconfident teen boy.

Or blue haired wonder girl, as I like to call her.  As you can probably tell, this story is fantasy and I have no qualms in making that perfectly clear.  If the shadow men I’ve deemed “Apparates” weren’t enough of a giveaway, I hope the fact that Silvia can shoot blue fire out of her hands was enough to tip the scale.  The world I’m creating is different than the one we live in, so my characters will reflect that as well.  While it might not be the norm for a girl to dress or act the way she does, people are less apt to question it, especially in the place she calls home.  (You’ll discover this in later chapters.)

My plan is to make Silvia as prominent in the story as Lucas and even though the plot won’t be centered on her, I want her to shine in her own unique way.  Her blue hair and choice of attire reflect the fire (both literally and figuratively) burning deep within her soul.  I won’t post Silvia’s character sketch because it reveals too much story wise, but just know that she acts the way she does for a reason.

As I’ve said before (and I really can’t say it enough), characters are what drive a story.  They make the decisions that change the plot (for better or worse) and they’re what keep readers coming back for more.  They have to be compelling enough to remain interesting, but realistic enough not to raise any eyebrows.  Readers have to feel invested in the characters, so they’ll be affected by their actions and want to know what happens next. 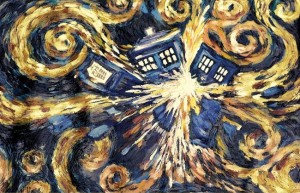